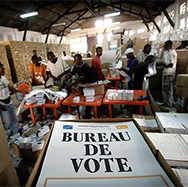 Election observation by independent observers has become an important way of supporting countries during the transition to democracy.

Review of the Management of the Election Observation Roster

International election observation plays an important role in the promotion of democratisation, human rights and the rule of law. The Department maintains a roster of observers who are available to participate in election observation missions. We nominate observers to missions organised, in the main, by the EU and the OSCE.

In October 2021, given the progress of Ireland's vaccination programme and the re-opening of non-essential international travel, Ireland resumed nomination of observers to Election Observation Missions organised by the OSCE and the EU.

Read our FAQs on COVID 19 considerations for EOM participation.

To date in 2022, Ireland has sent 21 individual observers to EU or OSCE election observation missions in: Colombia, Serbia, Hungary, Lebanon, Kenya, Bosnia and Herzegovina, São Tomé and Príncipe and Lesotho.

Read our breakdown of missions, flights costs and average flight emissions for 2022

Following the resumption of nominations in October 2021, Ireland sent nine STOs to observe parliamentary elections in the Kyrgyz Republic in November 2021.

Click on the following links for a breakdown of mission and flights costs and average flight emissions for 2019, 2020 and 2021.

The roster facilitates the participation of suitably skilled and vetted volunteers who are available to participate at short notice in Election Observation Missions under the aegis of the Organization for Security and Cooperation in Europe (OSCE) and the European Union (EU). Further information on the roster is available in this Information Note.

The current election roster was established in January 2019. The roster selection process has now concluded. A number of applicants contacted the Department with questions about the 2018 roster mustering process. Further information is available in the Composite Response. The Department does not accept applications for election observer missions from members of the public who have not been shortlisted to the roster.

Election observation by independent observers has become an important way of supporting countries during the transition to democracy.

Review of the Management of the Election Observation Roster