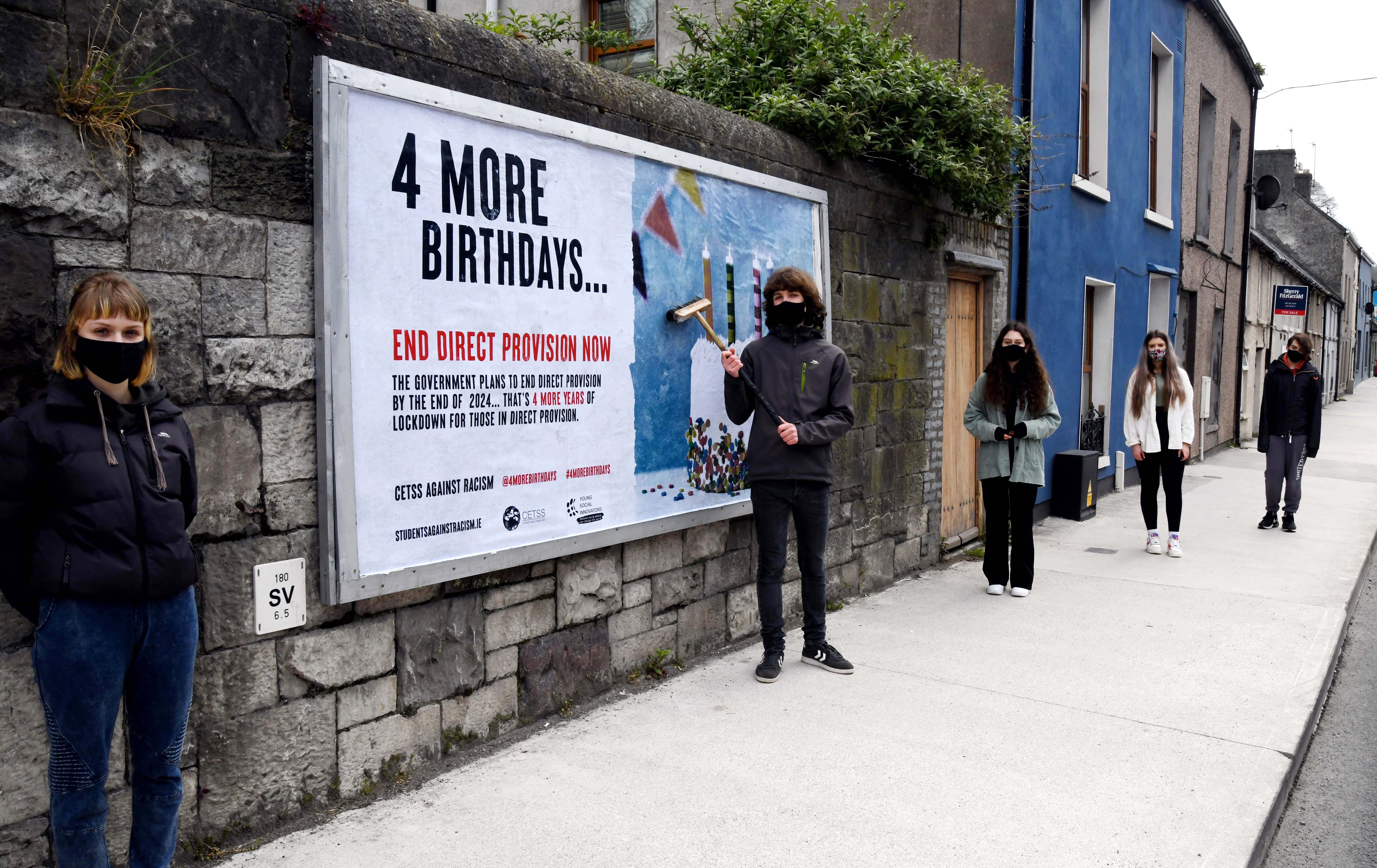 Students from Cork Educate Together Secondary School at the installation of their billboard at Lower Glanmire Road, Cork (Photo: Denis Minihane, Courtesy of The Echo)

At a special online award ceremony on 13 May 2021, the Young Social Innovators Global Citizens Award was presented to a team from Cork Educate Together Secondary School for their project, End Direct Provision. As young people from Cork, which has direct provision centres in every constituency, the team wanted to stand with young people who are experiencing this system and to push to end it before 2024 if possible.

The team researched the issue with relevant organisations such as MASI, an organisation established and run by asylum seekers, with NASC which is the Migrant and Refugee Rights Centre and with the Irish Refugee Council. They built a website and worked with the wider school group, CETSS Against Racism. With the help of Notes To Cork creative design agency, the students installed a three-metre-long billboard on the Lower Glanmire Road, calling on the Government to accelerate its plan to end direct provision. '4 More Birthdays …' indicates that four more years of Direct Provision is four years too many.

The special awards event was hosted by Zara King and Dayl Cronin and included an address by An Taoiseach, Micheál Martin who recognised and commended the extraordinary contribution by young people to their communities over a particularly challenging year.

Young Social Innovators (YSI), established in 2001, is dedicated to harnessing young people's energy and passion to build a fairer, more equal world. YSI's Social Innovation Action Programme raises awareness of issues concerning social justice, equality, inclusion and fairness. It is youth-led and enables young people, working in teams, to take action on issues of concern to them in today's world. In order to strengthen the Global Citizenship dimension of the awards, Irish Aid at the Department of Foreign Affairs, through its WorldWise Global Schools programme, sponsors the Global Citizens Award, to acknowledge projects which have a global context and in which young people seek justice and equality as global citizens.

Sustainable and ethical fashion and raising awareness around the impact that fast fashion has on the planet was of concern to other groups. One of these groups was from Coláiste Bríde, Clondalkin, Co. Dublin who won the Bronze award for their 'Brand New 2 You' project. The team wanted to change the mindset of teenagers in particular by making pre-loved clothes and up-cycling an option. They worked closely with Ireland's National Sight Loss Agency (NCBI), with the overall aim to introduce Ireland's first #BrandNew2U week which would see schools participate to promote sustainable and ethical fashion. For the awareness week, the group hope to coordinate the first sustainable fashion show, up-cycling workshops, and decorate NCBI shop fronts with the intention of recruiting additional schools and charities in the coming years.

Each of the teams who entered the YSI competition explained to the judges how their project was helping to achieve the Sustainable Development Goals. The Irish Aid's  (Department of Foreign Affairs)  Global Citizenship Education programme strengthens understanding of the global justice dimension of each of the Goals, inspiring and enabling people to take action at local, national and global levels. The optimism and passion of all of the young Innovators involved in such a difficult year makes us hopeful that the 2030 agenda may be achieved.

At a special online award ceremony on 13 May 2021, the Young Social Innovators Global Citizens Award was presented to a team from Cork Educate Together Secondary School for their project, End Direct Provision.