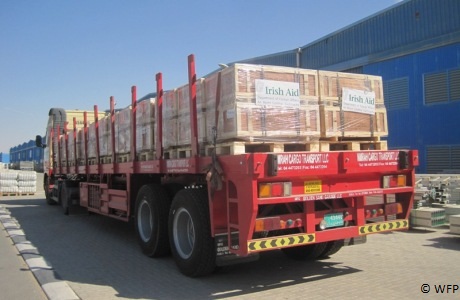 Irish Aid is supporting relief efforts and emergency services such as shelter, food, water and health for 12.9 million people affected by the tropical storm.

Relief efforts are under way after the devastating effects of Typhoon Haiyan in the Philippines. Irish Aid is working with the government of the Philippines and NGO partners to distribute emergency supplies and funds.

In total, 150 tonnes of materials have been airlifted by Irish Aid to the region. Ireland’s total contribution to the relief effort currently stands at €3.5 million.

In the wake of the disaster, an initial €1 million of funding was announced, together with €500,000 worth of emergency supplies which were airlifted on 19 November to the Philippines. These supplies are currently being distributed by our partner Plan to survivors of the typhoon.

As the devastation of the typhoon became more apparent, the Tánaiste announced an additional €1.6 million in emergency relief funds which are being channelled through our partner NGOs. This funding is supporting relief efforts and emergency services such as emergency shelter, food, water and health for the 13 million people who have been affected by the tropical storm.

In addition to funding and emergency supplies, five members of Ireland’s Rapid Response Corps are being deployed to provide their skills and expertise to a variety UN agencies in the Philippines.

How you can help

Read the OCHA guide to giving document for information about what is needed.