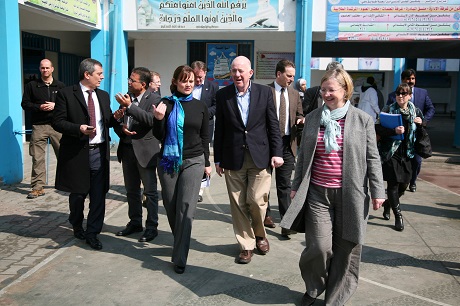 Minister for Foreign Affairs and Trade, Charlie Flanagan, visited Palestine today as part of a weeklong visit to the Middle East. During his visit, Minister Flanagan visited some of the programmes supported by Ireland through our aid programme, Irish Aid.

The Minister visited a school and collective centre in Gaza city, run by the United Nations Relief and Works Agency for Palestine Refugees (UNRWA). During the conflict in Gaza last summer, UNRWA opened its schools to provide shelter to hundreds of thousands of people displaced by the fighting, and its provision of food aid was a lifeline for thousands of refugee families. Some of UNRWA’s schools are still being used as temporary accommodation for over 10,000 displaced people who have no homes to return to.

Minister Flanagan also met with UNRWA Commissioner General Pierre Krähenbühl, and conveyed his sympathies to the families and colleagues of UNRWA staff who lost their lives during the conflict last year.

During his visit, Minister Flanagan announced further Irish Aid funding. €4.7 million will be provided to UN agencies as part of Ireland’s programme of assistance to the Palestinian people. The funding consists of €4 million for the UNRWA General Fund, €500,000 to UNRWA’s response in Gaza, and €200,000 to support the UN’s Emergency Response Fund.

Ireland has given €89.62 million in funding to Palestine over the last 10 years

Ireland’s programme of support to the Palestinian people is designed to support and reinforce the overarching political objective of a peaceful resolution to the conflict, and the emergence of a viable and prosperous Palestinian State.

Ireland has been providing assistance to the Palestinian people for over two decades. Our support has a strong focus on the education sector. €1.5 million was provided in 2014 to support the Palestinian Authority’s Education Development Strategic Plan, through a well-coordinated joint donor fund – the Joint Financing Arrangement - supported by Belgium, Finland, Germany and Norway.

Ireland has also provided targeted support over recent years to a number of key Palestinian and Israeli NGOs for their work in the area of human rights in the occupied Palestinian territory. Ireland’s funding also addresses both humanitarian and development needs; providing emergency assistance to the most vulnerable, while also supporting the Palestinian Authority in public service delivery and civil society advocacy for human rights.

Support is also provided via the PEGASE mechanism overseen by the European Commission, which supports vulnerable Palestinian families through direct social cash transfers and support for public service salaries.

Following the establishment of the Palestinian Authority in 1994, Ireland opened a Representative Office in Ramallah in 1999.  The programme has grown steadily in recent years, from a total of €4.49 million in 2005 to €11.28 million in 2014.  In 2005, the first Irish Aid Country Strategy was developed, and up to 2014, a total of €89.62 million was provided in support to the Palestinian people.

Find out more about how Ireland aids Palestine