Clubbing Together to Protect the Environment 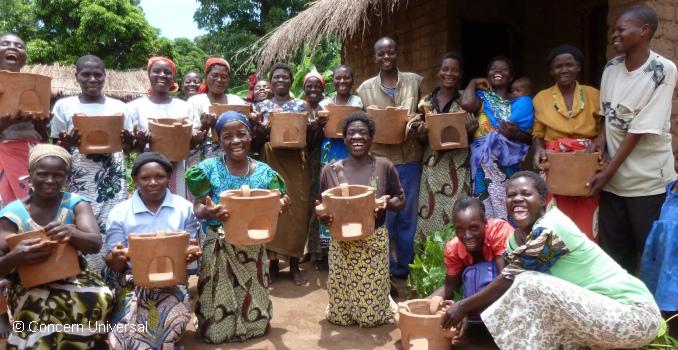 Mg'anja Stove Group, Kachindamoto, with the stoves that they have produced.

When you think about protecting the environment and coping better with the effects of climate change, changing your cooking stove probably isn’t the first thing you think of. But that is how members of the Village Stove Clubs in Malawi are doing their bit to protect their environment.

They are replacing their old cooking methods, which involve sitting a pot on three stones surrounding an open fire, and producing more efficient ceramic stoves for themselves and the villages around. 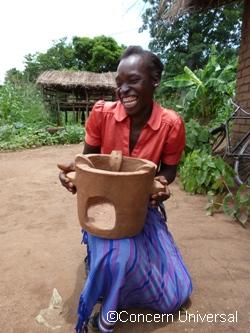 The new green stoves use less firewood or charcoal than the traditional method so they help to protect the fragile environment. Fewer trees are cut down, reducing the risk of soil erosion and soil degradation and increasing the chances of better crop yields.‌

The new stoves benefit women in particular, as they now spend less time collecting wood and can earn a small income from selling the new stoves.‌

The new cooking stoves also have health benefits as they produce  a lot less smoke in people’s homes when they are lighting, reducing the threat of respiratory illnesses.‌

Using these stoves helps villagers in rural Malawi and beyond to protect the natural resources they rely on and contribute to a sustainable future for themselves and their communities. The club is able to produce 2,500 stoves, and to sell 600 in a two month period. The income has been used to buy maize which is the main food staple in Malawi and is relied on in times of drought.

Irish Aid, working with NGO partners Concern Universal and Clioma in Malawi, have organised programmes to inform communities about the benefits of the new stoves which is one way of reducing the impact of climate change on a local level.

This is of particular importance in a country like Malawi, where nine out of ten rural households use traditional cooking methods which depend on wood fuel. These unsustainable methods contribute to the consumption of 7.5million tons of firewood and charcoal, and the destruction of between 50,000 and 70,000 hectares of forest every year. The project is an example of how new ways of doing things can make a real difference in the lives of poor people and communities while at the same time protecting the environment.

Members of the stove group sell the stoves that they produce for approximately 300MWK, or about €0.56, each.