Prioritising the most vulnerable in emergencies. 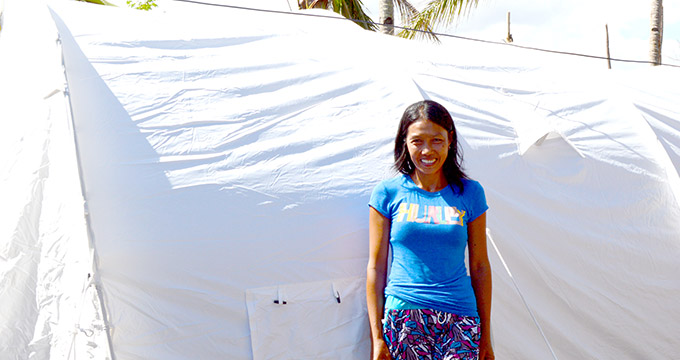 167 homes in Rose’s village were destroyed but it was only possible to distribute 30 tents.

Rose Castro, a 35 year old mother of one, used to run a small shop near the town of Tolosa in Leyte province in the Philippines. But on the 8th of November, one of the strongest storms ever recorded, Typhoon Haiyan, washed away her shop as well as her home.

While 167 homes in Rose’s village were destroyed, it was only possible to distribute 30 tents in this area due to the limited supply. Rose considers her family lucky to have been selected to receive one of these tents which were distributed by our NGO partner, Plan Ireland.

Rose is very grateful to the people and government of Ireland for the help that she had received.

But the reality is that Rose’s family didn’t receive the tent because of luck, but because of Irish Aid’s policy to prioritise the most vulnerable members of society. Local Authorities in Tolosa identified Rose’s family as vulnerable because she and her husband care for not only for their seven year old son, but for Rose’s two elderly uncles, both of whom live with disabilities.

The family have been receiving food rations from the local government and her husband has secured temporary work as a labourer to clean and repair the local school as part of a cash-for-work scheme. The community prioritised the repairs to the school so that the students could return as soon as possible.

Rose expressed her concern for the future, and her fear that with her business and source of income destroyed that they would not be able to rebuild their home or provide for her family.

Despite these concerns and what little she had left, Rose is very grateful to the people and government of Ireland for the help that she had received.