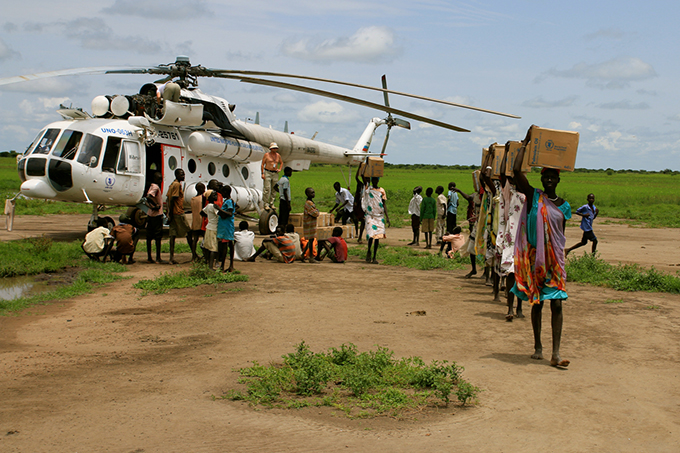 Today, 20th June, is World Refugee Day. This day offers us an opportunity to reflect on the tragedies that have forced so many individuals and communities to leave their homes. It can also be a day which inspires us to redouble our efforts to assist the huge numbers of refugees and people displaced within their own countries. In total, there are currently more than 65 million people forcefully displaced from their homes worldwide, a greater number than at any time since the Second World War. More than 22.5 million are refugees and more than half of all refugees are children. Each displaced person has their own reason for leaving home, and often it is a combination of factors including conflict, hunger, drought and natural disasters, which forces populations to flee.

Ireland has been active in assisting vulnerable displaced persons in both high-profile refugee crises, such as the Syrian and South Sudan humanitarian crises, but also in responding to lesser-known crises, such as the ongoing forced displacement of people in North-Eastern Nigeria and the Lake Chad Basin and Somali refugees in Kenya. Ireland partners with two of the UN agencies most closely involved in addressing the urgent needs of refugees and displaced people globally: the UN refugee agency, UNHCR, and the UN’s children agency, UNICEF. Ireland has provided a total of €36.8 million in core support to UNHCR since 2012 and €46.2 million to UNICEF. We also provide funding for specific UNHCR and UNICEF programmes providing assistance to refugees in various countries, including Uganda, which is now hosting the largest refugee population in Africa. We also support the work of various agencies, such as the Red Cross and Red Crescent and partner NGOs, such as Concern Worldwide, Trócaire and Plan International, to enable them to continue to respond to the critical and growing needs of refugees in crisis situations.  These include Syrian refugees in Jordan, Lebanon and Turkey, South Sudanese refugees in Ethiopia and Uganda, Burundian refugees in Tanzania, and Central African refugees in Chad and the Democratic Republic of Congo. Below are just some examples of refugee crises where Ireland is providing life-saving assistance to ensure that refugees’ basic needs are met and their human dignity respected.

As the conflict in Syria continues to cause injury, disease and death, millions of Syrians have left their homes in search of safety. As a neighbouring country, Lebanon is perceived to be a safe haven by many fleeing war and an estimated 1.5 million Syrian refugees are now living in Lebanon – a number equivalent to a third of the country’s population.

Syrian refugees in Lebanon live among Lebanese communities and in informal tent settlements in more than 1,700 locations across the country. Yet, once refugees reach Lebanon, they still face many challenges. In 2017, over half of the estimated total population of 5.9 million in Lebanon are projected to require humanitarian assistance. Lebanon has existing economic and social difficulties, with a high proportion of Lebanese living under the poverty line. Displaced Syrians, Palestine Refugees in Lebanon and Palestine Refugees from Syria, one of the most vulnerable groups in the region, are all struggling to find sustainable livelihoods and many are living below the poverty line and require assistance.

Children have also been severely impacted as a result of the Syrian conflict. A quarter of a million displaced Syrian children between 3 and 17 years old remain out of school - exposing them to physical and/or psychological violence, child labour and exploitation, early marriage, and recruitment by armed groups. Although Lebanon has allowed Syrian children to enrol for free in public schools - limited resources, lack of school readiness, obligation to work and Lebanese policies on residency and work continue to pose significant barriers to education.

Nearly 4 million, or one in every three, South Sudanese have been forced to flee their homes since conflict erupted in December 2013. South Sudan is now one of the most severe humanitarian crises in the world with nearly two  out of three people of its total population of 12 million in need of humanitarian assistance and protection. In the last four years, 2 million people have been internally displaced in the country, and 1.9 million people have fled as refugees to neighbouring countries. Young people have been most impacted by the crisis, with two-thirds of South Sudanese refugees under the age of 18.

In response to this ongoing humanitarian crisis, Ireland has provided crucial assistance to those affected by this crisis, both in South Sudan and in neighbouring countries, particularly in northern Uganda, and in Gambella in western Ethiopia, where many have sought refuge from fighting. Since 2012, Ireland has provided almost€48 million in humanitarian assistance to this crisis, including €11 million last year, and €9 million so far this year. 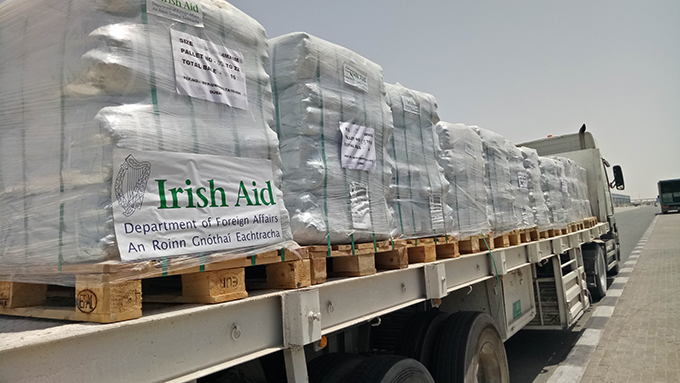 Over 400,000 people have fled Burundi since April 2015, following protests against President Nkurunziza seeking a third term and a harsh government response which included kidnappings, extrajudicial killings and arbitrary detention in the country’s overcrowded prisons. The majority of these refugees are now living in refugee camps in Tanzania, with significant numbers also living in Uganda, Rwanda and the Democratic Republic of Congo.

Ireland has responded to the crisis with support to UN agencies and NGOs who are providing assistance to those within Burundi and refugees across the region. In 2016, €200,000 was provided to UNOCHA towards a protection capacity project in Burundi, with additional funding provided to Christian Aid and Oxfam for livelihoods and food security projects within Burundi. In Tanzania, Irish Aid provided €1.5 million in 2016 to the World Food Programme and the UN Refugee Agency (UNHCR) for food rations and for the construction of schools for the many refugee children. Further support was provided to NGOs such as Concern and Oxfam who are providing essential services to refugees in Tanzania and Rwanda.

Life for a South Sudanese refugee in Uganda

As South Sudanese refugees continue to arrive in Uganda, Irish Aid is providing critical assistance for Susan and other mostly women and children in the refugee settlements through the World Food Programme (WFP) and the UN Refugee Agency (UNHCR). 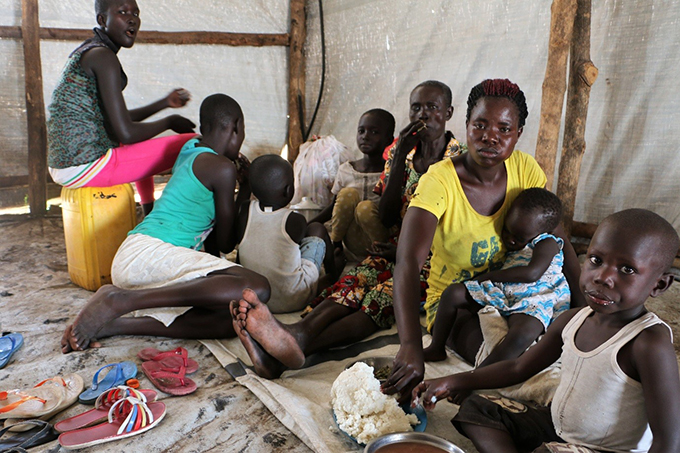 Susan, in yellow shirt, eats with her child and her neighbours in Shelter 11 at Imvepi. Photo and Story by WFP/Lydia Wamala

Susan Zande accepts my offer to help her carry her cooked food from the World Food Programme [WFP] distribution point to the shelter where she sleeps at the refugee transit centre of Imvepi in northwest Uganda.

“We have to go all the way to shelter number 11,” the South Sudanese refugee says, with a smile, as she traverses the centre’s vast compound.

The food consists of maize flour mingled in hot water and then pressed into a type of bread. It has been carefully measured for the family size of three. The cereal is served with hot bean sauce, which she carries in a delicate tin bowl, careful not to spill any of it. She carries the sauce with her baby, aged one year and eight months, strapped to her back.

On arrival at her shelter, the 24-year-old finds her older child, four-year-old Mark Bidal eating with her neighbours, who live in the same tent. The neighbours were ahead of Susan in the food line and so they got their share first.

On seeing his mother, the four-year-old jumps up from the neighbours’ dish and leaps with joy toward his family’s plate. His mother unstraps herself of her baby and joins her son to eat their lunch meal. The two eat in silence besides the neighbours.

“Life is better now that we have something to eat,” Susan says. “We are served with breakfast and two additional meals; it is the only food we have had to eat since we arrived from South Sudan. After three days on the road from South Sudan, the porridge was the first serious hot meal we had, and Mark likes it very much. He eats and finishes his entire share.”

Susan hurries through her meal provided by the WFP so that she can quickly re-join the registration line of new-comers at Imvepi. Until she is registered, she cannot be allocated land by the Government, basic household items by the United Nations Refugee Agency (UNHCR) and NGOs and a resettlement food ration by WFP. With the support of Irish Aid and other donors, WFP gives each resettled refugee family a package of cereals, beans, fortified vegetable oil, iodized salt and specialized nutritious foods blended especially for children. WFP continues to support refugees when they are resettled by the Government, providing them with monthly family rations and specialized foods to treat and prevent malnutrition.

Further on in the camp we meet Susan and her neighbours who arrived on 28 April 2017. She walked all the way from her village of Kupera in Eastern Equatoria with her two children.

“I left my home because of fear,” she says. “Men had come the night before and attacked my home. They asked my husband for money and cows. When he told them he did not have either, they tied him up along with my brother and grandmother. They caned my husband and took him and my brother away. Up to now I do not know where they are.”

Susan says she was doing well in her business, selling snacks while cultivating cassava, sorghum and maize. She made money and bought clothes for her children.

“But I had to leave my crops and property behind. I only came with a small bag, mostly containing clothes for the children.”

The settlement of Imvepi is not new in Uganda. It closed in 2005 after the comprehensive peace agreement encouraged almost all South Sudanese refugees in northern Uganda to return to their homeland. Tragically, the conflict in the newly-independent nation has forced the settlement to re-open. Within ten weeks of opening again on 21 February 2017, its population had already grown to 76,000.

Uganda today hosts over 1.25 million refugees. More than 700,000 South Sudanese refugees have arrived in Uganda since fighting resumed in their country last July alone. They talk of gruesome killings and other crimes, food insecurity and dysfunctional systems in their country. Uganda now hosts more refugees than any other country in Africa, and the number is growing.

Uganda is recognised for its progressive refugee policy, which allows for a comprehensive approach to meeting refugee and host community needs. The Government of Ireland, through its official aid programme Irish Aid, provided €11 million for the South Sudan crisis in 2016, €9 million to date (June) in 2017, and in total has provided almost€48 million of humanitarian assistance to help the South Sudanese people both in South Sudan as well as those who have sought refuge in neighbouring countries.