Vietnam, with an area four times the size of Ireland has a population of over 94 million. Despite the impressive progress it made in the past two decades, significant numbers of people, particularly those from ethnic minority groups, continue to live in poverty. Through our support, local government is better able to respond to the particular needs of poor ethnic minority communities and other marginalised groups. Importantly, we are supporting men and women living in these communities, and local civil society, to have a say in decisions that affect them.

Vietnam at a glance 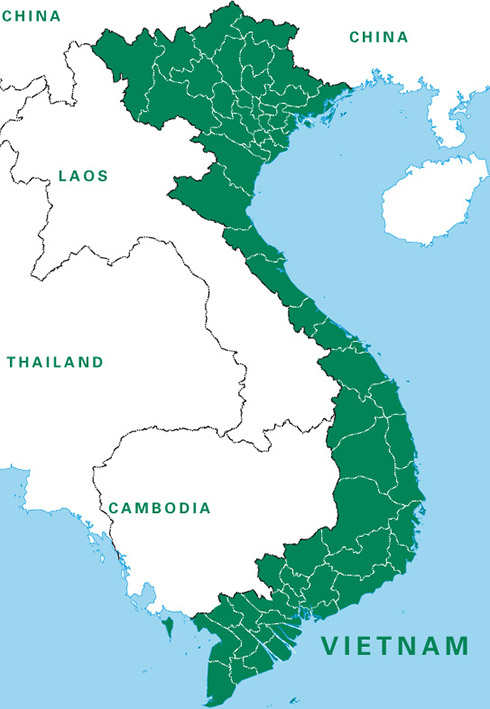 The Irish Aid Programme is managed by the Department of Foreign Affairs and Trade. The programme of bilateral cooperation with Vietnam was established in 2005 when Ireland opened an Embassy in Hanoi and Vietnam became an Irish Aid Key Partner Country. Vietnam is the only Irish Aid Key Partner country outside of Sub-Saharan Africa. The bilateral relationship between Ireland and Vietnam has been built on a very positive development cooperation partnership which has centred on reducing poverty among ethnic minority communities, sharing the experience of Ireland’s development through exchange between Irish and Vietnamese economic and social institutions, providing scholarship opportunities for talented young Vietnamese, and supporting Vietnam’s emerging civil society.

We have set out Ireland’s objectives in Vietnam in our new Vietnam Mission Strategy 2017 - 2020 (PDF), approved in May 2017, which supports the Government’s Socio-Economic Development Plan 2016-2020.

The Irish Development Experience and Sharing (IDEAS) programme continues to support capacity-building and strengthen strategic linkages between Ireland and Vietnam in the education, agriculture, agri-food, and business and economic sectors, including through peer-to-peer institutional links between state agencies and third-level education institutions, and through scholarships.

The development programme in Vietnam also provides support to strengthen the capacity of civil society organisations in Vietnam aimed at influencing policy response and service delivery in favour of groups that are marginalised on the basis of gender, migrant status, age, sexual orientation, ethnicity or disability.

The development programme in Vietnam also provides support to strengthen the capacity of civil society organisations in Vietnam aimed at influencing policy response and service delivery in favour of groups that are marginalised on the basis of gender, migrant status, age, sexual orientation, ethnicity or disability.

In addition to our programme activities in Vietnam, Ireland’s Embassy in Vietnam supports a small number of projects in the neighbouring accredited countries of Lao PDR and Cambodia funding, as well as in Myanmar. These include humanitarian mine action focused on the clearance of mines and unexploded ordnance, mine risk education and disability support, a regional programme to reduce stunting and malnutrition by increasing rates of exclusive breastfeeding and improving infant and young child feeding practices, support to civil society and support to address fragility and humanitarian needs in Myanmar.

The Embassy supports growing trade and bilateral relations and people-to-people links between Ireland and Vietnam, including support for our expanding Irish community and the provision of consular services and assistance.

Over its history, Vietnam has been occupied by external powers, most recently China, France, Japan and the United States. The country was reunified under the rule of the Communist Party of Vietnam in 1975, shortly after US military withdrawal. It remained isolated and largely closed to the outside world, having been subject to international sanctions, until the early 1990s.

Vietnam is a one-party state, led by the ruling Communist Party of Vietnam. In 1986, the National Party Congress opened up the economy to foreign investment and has committed to bringing about national economic reform, as well as reducing poverty through its Socio Economic Development Plan. Vietnam joined the World Trade Organisation (WTO) in 2007, integrating Vietnam into global trade systems. The current Vietnamese leadership took office in 2016.  Successive governments have prioritised delivering economic growth, improving living conditions and ensuring social stability. Vietnam seeks strong relations not only in its region but also globally, and places an emphasis on multilateral approaches.

The EU-Vietnam Partnership and Cooperation Agreement entered into force on 1 October 2016 (. The PCA sets out new and existing areas of cooperation in sectors such as economics, trade and investment, science and technology, natural resources, climate change and environment, security, health, education, research and many others.  Vietnam is currently in negotiations with the European Union to formulate a Free Trade Agreement with the EU. 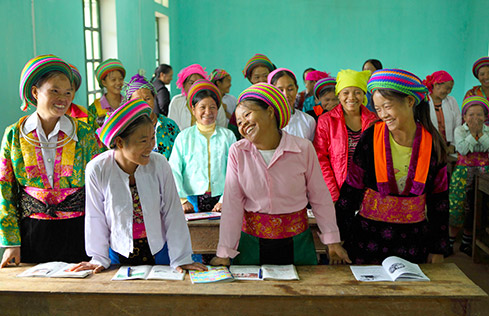 Vietnam’s economy is a development success story. Political and economic reforms (Đổi Mới), launched in 1986, made a shift from a centrally planned to a market economy and transformed the country from one of the poorest in the world to lower middle income status by 2016. Thanks to a stable political environment and low rate of inflation, economic growth has remained relatively high in recent years in Vietnam, averaging 6.4% per year in the 2000s. Real GDP grew by 6.2% in 2016 against a Government target of 6.7%. In 2016 agriculture currently accounted for 18.14% of GDP and 43.6% of employment. The majority of the rural population makes its living by growing and selling crops, raising and selling livestock and fish and from forestry products. Industry accounted for 36.37% of GDP and the services sector accounted for 45.49% in 2016. Vietnam’s biggest exports in 2016 were electrical machinery and equipment which accounted for 36.5% of total exports.

The EU-Vietnam Free Trade Agreement (EV-FTA), once ratified, and the emergence of the ASEAN Economic Community both provide fresh opportunities for Vietnam to attract more Foreign Direct Investment (FDI) and boost trade links.

The average income per year in Vietnam has increased from US$635 per person in 2005 to an estimated USD$2,100 in 2016. However, compared to some of its neighbours, Vietnam remains a relatively poor country.

Vietnam now faces a challenging period to remain competitive with other economies in the region where labour costs are lower, while trying to attain the higher value added and living standards of more developed neighbours.

Vietnam is ranked 115th out of 187 countries on the United Nations’ Human Development Index (Ireland is currently ranked eighth). Vietnam achieved four of the eight Millennium Development Goals (MDGs), those focused on poverty and hunger, education, gender equality and maternal health. Vietnam has a national action plan on the implementation of the 2030 Agenda for sustainable development and the attainment of the Sustainable Development Goals (SDGs).

Social outcomes in Vietnam have improved dramatically across the board, with extreme poverty dropping from very high levels in the 1990s to 8.2% in 2016 according to national poverty measurements. However, these statistics mask the reality of multi-dimensional poverty and the inequality in the distribution of human development across the population at the country level. Approximately 9 million people still live in extreme poverty and more than 5 million still live just above the poverty line and could easily slip back to extreme poverty. Economic growth is not benefiting the population equally.

The poverty rate in rural areas is considerably higher than that of the urban areas. Vietnam’s 53 ethnic minority groups, most of whom in rural and remote mountainous areas are disproportionately affected by poverty: although they comprise just 15% of the population, ethnic minorities account for around half of those living in poverty in Vietnam. The poor are the most vulnerable to economic shocks, in particular, high inflation. Preventing malnutrition remains a challenge, especially among ethnic minorities, who continue to suffer unacceptably high levels of childhood stunting (almost 40% compared to a national average of 25%).

In Vietnam the percentage of the population with disabilities is high at 15%, in part due to its war legacy. Disability is significantly correlated with poverty, school attendance rates for those with disabilities are far below those of non-disabled persons, and disabled people face many barriers to employment.

Gender remains a determinant of poverty and vulnerability in Vietnam, in spite of equal attendance at primary school and one of the highest female labour force participation rates in the world.

Vietnam ranked as the world’s seventh-most vulnerable country to climate change and disasters in the Global Climate Risk Index for the period 1994-2013.

Over the five-year period of the previous Vietnam Country Strategy 2011-2016, we provided more than €70 million. We spent more than €12 million in 2016 (see Summary of Partner Country Expenditure by Sector) – Annex 9 Irish Aid Annual Report 2016. 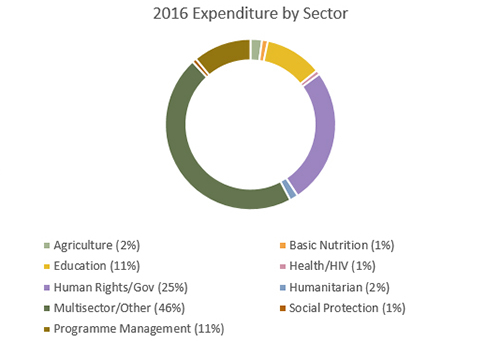 In Vietnam, we support the implementation of the Government’s Socio-Economic Development Plan through our focus on increasing inclusion and encouraging innovation. We do this by working with a variety of partners at national and local level including government institutions, UN agencies, international and national research institutions, mass organisations and civil society organisations.

A holistic approach to the development of ethnic minority communities

Promoting the inclusive and sustainable development of ethnic minority communities is a complex issue requiring collective action by government, development partners and communities themselves. Under the new Strategy, the Embassy is rolling out a more holistic approach, which addresses ethnic minorities’ development needs from various dimensions including access to services, nutrition, gender empowerment, climate and environmental sustainability, and community voice and participation. To support these efforts, the Embassy has established a partnership group of government, multilateral and international and local NGOs, each with different areas of expertise, who cooperate and share learning and innovative approaches to multiply the impact of their work. 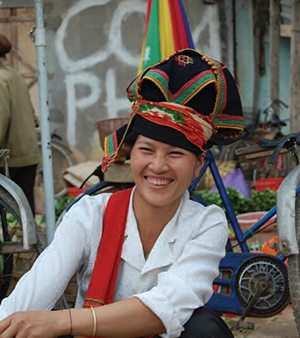 Sharing experience and skills from Ireland

In response to strong interest and demand from our Vietnamese Government partners, we are contributing to critical analysis and public debate in Vietnam using Ireland’s own experience in economic management and independent studies from national research bodies.

Through the Irish Development Experience and Sharing (IDEAS) initiative, we are facilitating the exchange of ideas and strengthening strategic linkages between Ireland and Vietnam in the areas of education; agriculture; agri-food; and the business and economic sectors. We provide targeted scholarships for students from the region to study in Ireland focussing on labour market skills and the STEM subjects (science, technology, engineering and mathematics), as well as some opportunities for business development and entrepreneurship. We provide seed funding, through the Vietnam Ireland Bilateral Education Exchange (VIBE) programme, to build co-operation between universities and research institutions in Ireland and Vietnam.

Helping shape national policies that benefit the most marginalised

Ireland provides support to strengthen the capacity of civil society organisations working to influence policy response and service delivery in favour of groups that are marginalised on the basis of gender, migrant status, age, sexual orientation, ethnicity or disability. Through its networks, the Embassy will encourage respect for the basic rights needed for civil society to grow and flourish. 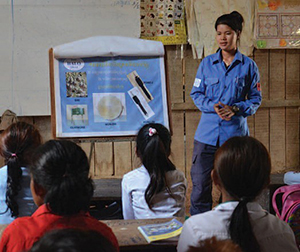 At national level, Vietnam has made significant progress over recent years:

How we have helped

Irish Aid has played its part in the progress made by Vietnam and the region. In 2017 our work contributed to the following results: