Read more about how we respond to hunger in the Report of the Special Envoy on Hunger (PDF, 728.6kb)

Research on hunger and nutrition

Although the world produces enough food to feed everyone, worldwide, about one in eight people suffers from chronic hunger. A further one in three suffers from under-nutrition. Irish Aid is supporting research on the best ways of helping those suffering from hunger and under-nutrition. We are also supporting the development of technologies and innovation to meet future food demands.

Why we invest in research

About 842 million people do not get enough food to be healthy and lead an active life. And children are at most risk. Currently, each year, under-nutrition levels in developing countries every year contributes to five million deaths of children under five years of age. Hunger and under-nutrition reduce health and well-being and compromise people’s future potential. In children, it can reduce their capacity to grow and learn. 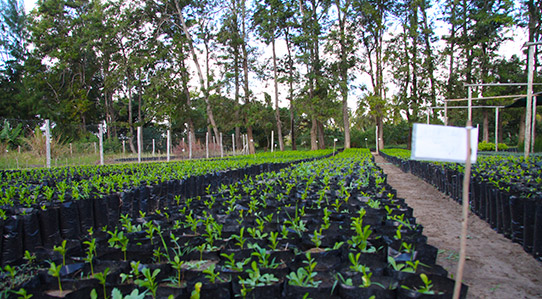 We target investments in research that help prevent, and treat under-nutrition, in young children. Since 2001, we have supported research pioneered by Valid International and Concern Worldwide on the treatment of severe and moderate acute malnutrition in very poor communities and countries.

This research has demonstrated that CMAM approach has higher recovery and lower fatality rates. It is also up to 90% cheaper than conventional treatments. In Ethiopia, Malawi and Sudan, between 2001 and 2005 CMAM reached more than 70% of the population in need, compared to less than 10% for clinic-based treatment programmes.  It has led to changes in international malnutrition treatment policy and has been adopted by 55 countries. It is widely used by Ministries of Health and international agencies in both emergencies and longer-term development programmes. ‌

Research on vitamin A deficiency

Malnutrition results in a lack of essential vitamins and minerals necessary for health..Vitamin A deficiency, for example, can cause blindness and reduce the body's resistance to disease. Vitamin A deficiency in children can also cause growth retardation. Worldwide, between 100 and 140 million children are deficient in vitamin A.

We have supported research into increasing access to vital vitamins and minerals We support research on the orange-fleshed sweet potato, a vegetable rich in vitamin A, with the International Potato Centre (CIP). We ensure this research is used for the benefit of poor people by funding partnerships with agencies working on the ground in our partner countries.

In Malawi, for example, we work with the local International Potato Centre and with Concern to develop new varieties of potato and to educate communities on the benefit of consuming this nutritious crop.

In Mozambique, our partnership with the Potato Centre and Helen Keller International has increased the potato consumption among 12,000 households and has resulted in improved vitamin A intake among young children and their mothers.

The population of the world is estimated to grow to nine billion by 2050; most of the increase will be in developing countries. This will place an even greater burden on countries to produce sufficient food supplies and ensure that all people have access to the food and nutrients that they need.

Agricultural research is a good investment - for every €1 invested in CGIAR research, it is estimated that €9 worth of additional food is produced in the developing world.

We accordingly have a strong focus on supporting global agricultural research for development, such as is undertaken by the   Consultative Group on International Agricultural Research (CGIAR).

CGIAR is a global system of agricultural research for development that undertakes research which includes the development and propagation of more productive,  hardier, seeds able to resist floods and droughts , and better farming techniques. The aim is to improve crop yields, and breed crops which are more nutritious, while also utilising more sustainable farming practices which are climate-smart, nutrition-sensitive and gender-sensitive.

Irish Aid’s targeted support for agricultural research within CGIAR is strategically grounded in the recommendations of the 2008 Hunger Task Force report. We prioritise research into improving smallholder productivity in ways which are climate-smart, nutrition-sensitive and gender-sensitive.

For example, climate change and environmental degradation increases the risk of hunger and under-nutrition for the world’s poorest and most marginalised people who live in high risk environments.  At global level, we contribute to work on managing climate change consequences for the poor smallholder through our support for the GGIAR Research Programme on Climate Change and Food Security (CCAFS). In pursuit of our emphasis on improving nutrition, we also support the research programme Agriculture for Nutrition and Health (A4NH). In addition to our support for these high-level global thematic research programmes, several of our missions work with CGIAR centres at country-level on projects.

And this agricultural research is a good investment - for every €1 invested in CGIAR research, it is estimated that €9 worth of additional food is produced in the developing world.

Through our support and other donors, CGIAR is now developing new, more resilient crops. More than fifty new drought-tolerance maize varieties have been adopted over recent decades. This has resulted in an increase in yields of up to between 20 and 50% across some areas of eastern and southern Africa. And we will continue to support research on how best to expand this knowledge across more countries and communities.

Research is not conducted for its own sake but must always be undertaken with an eye to how it can make a positive impact on development. It is crucial to get research into use. We support numerous initiatives to do so. Irish Aid is, for example, directly supporting Farm Radio International to provide advisory services to smallholders in Ethiopia, Malawi, Uganda and Tanzania.

Read more about how we respond to hunger in the Report of the Special Envoy on Hunger (PDF, 728.6kb)