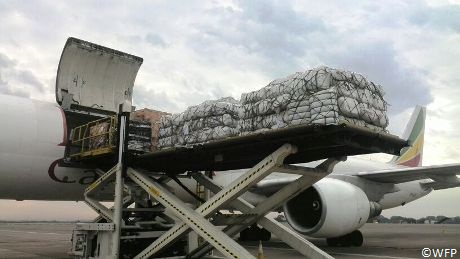 Ireland’s Rapid Response Initiative, designed to respond quickly to humanitarian emergencies by deploying highly skilled staff and sending emergencies supplies, had a busy year. 32 members of the Rapid Response Corps were deployed around the world, and 269 tonnes of stock were airlifted to emergencies in South Sudan, Central African Republic, Iraq and Sierra Leone.

The Rapid Response initative is a central feature of Ireland's humanitarian programme since 2007.

There are two key elements to the initiative: a roster of highly skilled and expereinced professionals (such as Engineers, Logisticians and Humanitarian Affairs Officers) who are willing to deploy at short notice to emergencies; and the pre-positioning and transportation of essential humanitarian supplies (such as blankets, tents, kitchen sets, mosquito nets and water cans) to emergency areas.

As part of the Initiative, Ireland pre-positions emergency humanitarian stocks within the UN Humanitarian Response Depot (UNHRD) Network of hubs around the globe.  These hubs are strategically located near disaster-prone areas - in Accra (Ghana), Brindisi (Italy), Dubai (UAE), Panama City (Panama) and Subang (Malaysia) - within airport complexes, close to ports and main roads, ensuring transport costs are kept to a minimum while permitting the rapid dispatch of supplies in case of a crisis.

Ireland made a significant investment in the establishment of the UNHRD Network and, in particular, the hub in Accra, where €600,000 was contributed to the construction of the facility. Ireland also contributes €500,000 annually towards the UNHRD running costs.

The items stored by Ireland in these hubs have been selected in close consultation with UN agencies, and they typically have no shelf life, are easy to pack and transport, and are selected for their versatility of use in all emergencies.

In November 2013, the largest ever overseas humanitarian logistics operation Ireland’s history was undertaken in response to Typhoon Haiyan in the Philippines, when 166 tonnes of aid were transported in four separate airlifts. The second largest overseas humanitarian logistics operation was undertaken in January 2010 in response to the Haiti earthquake crisis, when over 130 tonnes of aid were transported in two separate airlifts