Ireland has improved its ranking in the Hunger and Nutrition Donor Commitment Index (HANCI), now coming in fifth place among all donors. This reflects Ireland’s strong commitment to the fight against global hunger and malnutrition.

HANCI is an accountability tool that measures donor countries’ political commitment to tackling hunger and under nutrition, under three main areas: laws; policy/programmes; and public spending.

Ireland improved one rank compared to last year’s score on the HANCI. The report praised Ireland’s financial support for agriculture and food security, which it said was “enduring and stable over the past decade.”

The report stated that the share of spending on nutrition had increased within the overall portfolio of Irish Aid, and that “Ireland had met its nutrition spending promises in an exemplary manner over the past year.” Tribute was also paid to Ireland’s actions on climate change in developing countries, noting that Ireland’s performance on climate change indicators has improved.

The HANCI was released this week during the Second International Conference on Nutrition, being held in Rome from November 19th to 21st. The conference focused global attention on malnutrition, which hampers development and reduces life expectancy for millions worldwide.

The fight against global hunger and under nutrition is one of Ireland’s priority areas for action, and Irish Aid has many programmes within their nine partner countries that tackle the issue.

Globally, levels of hunger and under nutrition remain unacceptably high. According to the United Nations Food and Agriculture Organisation, from 2011to 2013, a total of 805 million people (one in eight people) worldwide were estimated to be suffering from chronic hunger. To tackle such chronic suffering a high level of political commitment from governments is essential to prioritise the fight against hunger and under nutrition 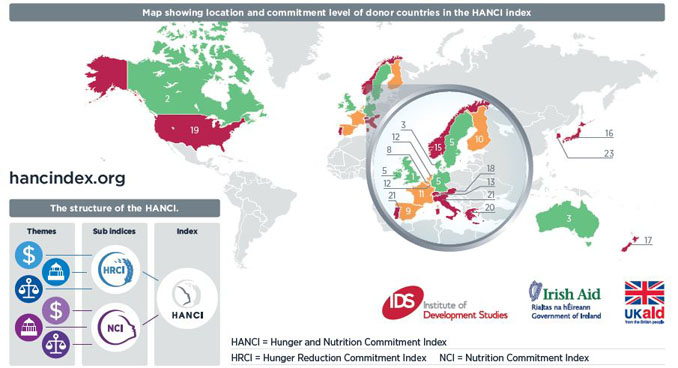 Check out the results of the HANCI index