Irish Aid pledges €12 million for those affected by Syrian conflict 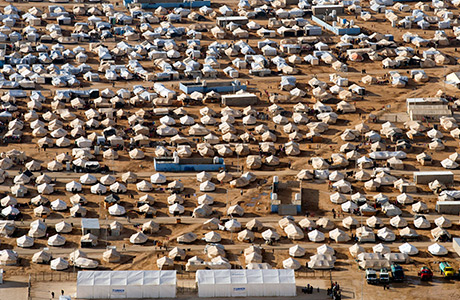 7.6 million are displaced within Syria, while 3.8 million are in sprawling refugee camps in neighbouring countries, such as this one on the Jordan-Syria border (C)UN

Ireland has pledged €12 million to help meet the urgent needs of those affected by the Syria conflict at a major humanitarian pledging conference for Syria in Kuwait.

The Conference, which is chaired by UN Secretary General, Ban Ki-Moon, is aimed at raising US$8.4 billion to help nearly 18 million people in Syria and the region in 2015.  Since the Syrian uprising began in March 2011, more than 200,000 people have been killed. Approximately 12.2 million people, over half of Syria’s population of 22 million, are in urgent need of humanitarian assistance. Approximately 7.6 million of these people are displaced within Syria, while millions more are refugees.

The humanitarian situation in Syria continues to deteriorate. There are serious concerns about the situation of the 4.8 million people that live in hard-to-reach areas, particularly the 212,000 people who reside in communities that are besieged by either the Syrian Government or armed opposition forces.

The UN has called the Syria crisis the ‘greatest humanitarian crisis in modern history'. The most urgent humanitarian needs inside the country are protection, health care, shelter, food and water and sanitation. The funding from Irish Aid will support the provision of life saving humanitarian supplies and essential services such as health, education and protection to millions of the most vulnerable Syrians, including refugees and internally displaced persons.  It will be channeled through international humanitarian agencies on the ground including the United Nations, the International Committee of the Red Cross (ICRC) and NGO partners.

Speaking at the Pledging Conference, Minister Sherlock highlighted the ongoing suffering of the civilian population, and urged all sides to respect international humanitarian law and to respect the safety and security of these frontline humanitarian workers.

Read more about Irish Aid’s support to Syria, through the World Food Programme, Goal, and UNICEF.