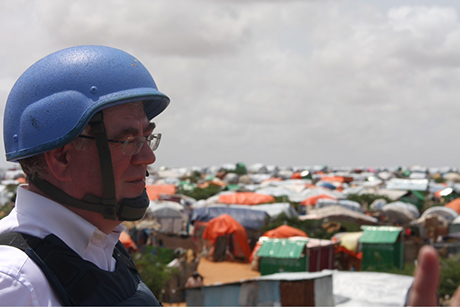 The Tánaiste and Minister for Foreign Affairs and Trade, Eamon Gilmore T.D., has welcomed Ireland’s election for the first time as a member of the United Nations Human Rights Council, the UN’s principal human rights body.  This was an especially hard-fought election and represents a major endorsement of Ireland’s international standing, in particular, our advocacy of human rights across the globe.

Following the vote by the UN General Assembly today, where Ireland was elected on the first count, the Tánaiste, said:

“I am delighted and proud that Ireland has been elected to the UN Human Rights Council for the period 2013-15. This comes at the end of a hard-fought campaign which saw us pitted against four formidable competitors in our group and I also want to congratulate the United States and Germany for also securing election.

Membership of the Council is a signal honour and privilege for Ireland.  It testifies to the strong reputation we have built up in the area of international human rights advocacy.  More widely, it reflects the esteem in which Ireland is held as a UN member and as a fearless champion of the values which underpin the UN. Serving on the Council over the next three years will allow us to play a much more active role in the promotion and protection of human rights worldwide and to make a distinctively Irish contribution to that effort.

In electing Ireland to the Council, the membership of the General Assembly has recognized the strength of our attachment to the UN, of our efforts to improve global human rights and of our commitment to international development assistance through Irish Aid. I want to thank all of those countries who chose to vote for Ireland’s membership of the Council today. This is a great day for Ireland and for the values which are dear to us”.

Ireland’s three year term on the Council will begin on 1 January 2013, the same day that Ireland assumes the Presidency of the European Union and hands over the Chairmanship of the Organization for Security and Co-operation in Europe.  The election was the result of extensive diplomatic efforts at the United Nations in New York and in capitals across the world.  In particular it reflects the efforts led by the Tánaiste in canvassing his fellow Ministers, especially at the UN General Assembly in September.

The 124 votes which Ireland obtained demonstrate the strength and breadth of support which Ireland received from the membership of the United Nations. Ireland’s focus on the Council, the most important international human rights body, will be on a number of issues.  These include the human rights situation in individual countries; freedom of expression, including freedom of religion and freedom of the media, in particular the internet; as well as human rights and climate change.  LGBTI rights will also be an important aspect of Ireland’s work on the Council.