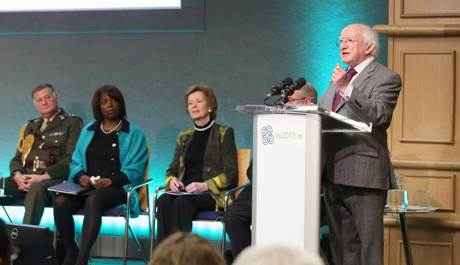 “The source of this hunger is not a lack of food, but the moral affront of poverty, created and sustained by gross inequalities across the world”

Opening the international conference ‘Hunger, Nutrition, Climate Justice’ co-hosted by The Government of Ireland and the Mary Robinson Foundation – Climate Justice at Dublin Castle this morning President Michael D. Higgins stated that it is his conviction that “global hunger in the 21st century represents the grossest of human rights violations, and the greatest ethical challenge facing the global community.”

“The source of this hunger is not a lack of food, but the moral affront of poverty, created and sustained by gross inequalities across the world”

and he suggested that when political commitments to the elimination or relief of hunger and nutrition “are betrayed in the name of interests, national or global, the hungry and poor of the world are twice smitten”.

In his address the President outlined how the lack of regulation of transnational land acquisition and transfer of water rights, speculation on food commodities and structural issues within global financial arrangements cannot be ignored and need to be urgently addressed.

President Higgins indicated his support for the call for international regulation of transnational land acquisitions;

“What is required is a robust regulatory framework which protects our fragile and threatened environment and which respects the right of small landholders to remain on their land and retain access to water sources. Such regulation needs to be developed collaboratively and transparently involving practitioners from developing countries, such as those here today and which is respectful of, and responsive to, their lived experiences”

Citing Africa and in particular sub-Saharan Africa as an example of transnational land acquisition and the transfer of water rights to investors, President Higgins said:

The President went on to describe how worldwide food speculation has contributed to the dramatic increase in the price of basic foodstuffs across the developing world and he drew attention to the manner in which large corporations increasingly controlled the food sector,  with, for example, five companies controlling 90% of the world’s grain trade and three companies controlling 85% of the world’s tea market.

While he welcomed the move by multilaterals, through the G20, to introduce an agriculture markets information system that would provide transparency in key commodity markets he emphasised that there were urgent moral and ethical issues in relation to food speculation which remained and which were emphasised at times of famine.

President Higgins praised Irish Government initiatives that addressed issues of hunger and nutrition and also praised the work of Irish Aid and its NGO community in raising awareness of the need for an integrated approach to food and nutrition security.

He concluded by emphasising the need for regulation as well as institutional and structural reform.

“We must not lose the opportunity to put the stamp of our shared humanity on these challenges. The institutional and structural reforms that are necessary are now more urgent than ever.  We need both bottom-up and top-down processes to create an enabling environment where marginalised groups have the capacity to claim their rights.  This means overcoming perceived constraints and ensuring that political processes towards the solutions are accountable, participative and courageous.”