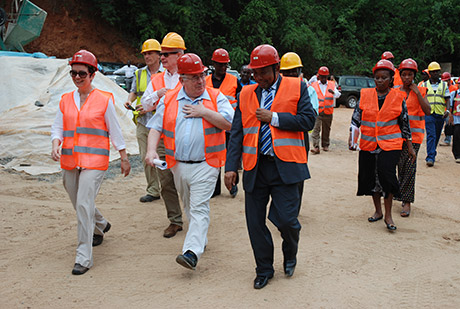 The Minister for Trade and Development, Joe Costello T.D., today (Sunday) begins an official visit to Tanzania, South Africa and Mozambique to see at first hand the impact of Ireland’s development programme and explore ways that Ireland can assist African partners to grow their economies and exit from aid dependency.

As part of Ireland’s EU Presidency, the Minister will also chair the EU-Southern African Development Community Political Dialogue in Mozambique.

Speaking ahead of his visit, Minister Costello said:

“Ireland’s aid programme is internationally recognised as one of the best in the world.  Our aid is rigorously focused on reducing poverty; eradicating hunger; helping children to survive their first year and go to school and ensuring that families have food to eat and clean water to drink.  The Irish people, through Irish Aid, are making a difference in the lives of some of the world’s poorest people.  However, we also need to look to a future after aid and how to grow trade between Ireland and Africa as the lasting solution for Africa’s problems is growing the domestic economy.”

In Tanzania, Minister Costello will visit health centres and schools to see how Ireland’s support for health, education and nutrition programmes is making a difference on the ground. He will also launch a milk dairy market hub, visit a rural electrification project operated by ESBI and visit Dar es Salaam port.

“Infant mortality has fallen by a third since 2005 in Tanzania. Ireland has played a role in reducing the number of children who die in childbirth through our support to the health sector. Development is working in Africa.”

“We also have to look to the next phase when our development partners will be our markets and trading partners.  I look forward to visiting Irish commercial projects and meeting with the Irish and local business community to discuss how we can continue to increase the trade volumes between Ireland and Tanzania.  It is only through growing two-way trade that we will help African countries reduce their dependence on aid.  I would encourage all Irish companies to look to the potential of the African market.”

“South Africa is the gateway in terms of trade for the Southern African region.  I led a trade mission to South Africa last year, and this visit is to follow-up on that trade mission.  I will be meeting with business leaders to see how best the Government can support Irish companies trying to enter into the South African market.”

In Mozambique, Minister Costello will also see how Ireland’s targeted programmes support the poorest families to access education, basic healthcare and improve their livelihoods.   Ireland also works to improve the capacity of the private sector to provide jobs and economic opportunities.

Note to the Editor